Posted by angus48 on July 4, 2015
Posted in: Reviews of the works of others. Tagged: action, Comicbook, Dystopia, Tragedy. 1 Comment

by Allan Moore and David Lloyd

with Steve Whitaker and Siobhan Dodds 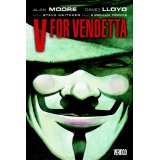 Been a while since this work was added to my reading list and now I’ve completed it.  Let me just say that it was worth it.  V is a man who was experimented on in an internment camp for undesirable persons.  Who said they were undesirable you ask?  The government of England does in this storyline because they are the last country standing after World War III.  They decide who to lock up and who to allow the semblance of freedom to based on skin color, sexual persuasion, credo and the droning belief of “England Prevails.”

V blows stuff up while he rescues Evey from being raped and killed by a gaggle of Vice cops.  He takes her into his refuge and teaches her all the things that have been purged from the officially sanctioned school curriculum.  He teaches her to think independently.

There are several compelling storylines in this presentation of V for Vendetta and sometimes they come off almost like a soap opera but they all have their little parts to play.  It is a shame that they did not pick this up as a mini-series instead of a one shot movie because there is a lot missing in that piece.

I enjoyed this enough to give it four satisfaction points for story and artwork.  Enjoy, and embrace anarchy…not chaos.