Audio Book Review: Excellent Dune tale with a little too much data dumping.

Book 1 of the Legends of Dune series.

Serena Butler is a political activist in the League of Humans because her father is the Viceroy. Well maybe that is how that works. They live on Salusa Secundus which all you Dune fans remember was the prison planet in the original Dune and ruled by the Corin family. Salusa is one of the worlds owned by ‘feral’ humans, those not overlorded by machine intelligences. It is a goal of the Cybermechs and Omnius to consume all of the planets that humans want. Serena doesn’t like that and neither does her heartthrob Xavier Harkonnen.

All the seeds of the series we know are gestated in the telling of this tale in which mankind throws off the yoke of thinking machines and takes back their destiny. I really enjoyed the crafting of this story and the ground work it lays to help see how to reach Frank Herbert’s Dune. The next editions in this series I hope will go a little easier on the Narrator data dump and allow characters to relate the story.

Well done. Giving this one three out of five entertainment units. Enjoy. 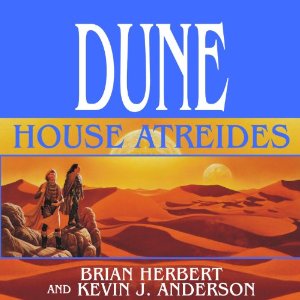 I had avoided the off shoot series created by Frank Herbert’s son and Kevin J. Anderson for quite some years because I really enjoyed the original series and I was concerned that the image would tarnish if these works were executed poorly. Oh man, was I pleasantly surprised.

Old Duke Paulson Atreides is a fine figure of an honorable leader who has learned his life lessons, not just read them in a book. His maxim ‘Never marry for love as it will surely be the downfall of our house’ is something young Leto Atreides will learn from example.

Meanwhile, elsewhere in the Imperium, an Emperor schemes to bring down a great house in order to get an edge on spice riches; A sadistic bastard hunts little children through archology tunnels then forests in order to feel…bigger; a planetologist dreams of reforming the planet Dune; The Bene Gesirit and the Bene Tleilax follow their own plans and machinations to shape the Universe. Yep, DUNE lives!

The character building of Leto Atreides going from teenager to inheriting the mantle of Duke of Atreides is artfully crafted. Definitely a set up for Dune. How the Baron becomes the extremely heinous character he is in Frank Herbert’s original Dune is really entertaining. Brian and Kevin may have painted Raban with slightly too much brains in this one but it is easy to see how his depravity kills that edge.

One thing that was lacking in other works of this franchise that I really enjoyed here was the ship to ship combat. I don’t want to spoil it for the reader or listener but this is a good addition.

Alright guys, I’m sold. Going to consume the rest of them in due course now. This was a audible product with excellent narration which I’m coming to expect from Random House Audio. Five entertainment points out of five is the best I can do for you here, Sorry!