Posted by angus48 on April 23, 2017
Posted in: Reviews of the works of others. Tagged: AI, Aliens, Funny, Hard SciFi, Military Space Opera. 1 Comment

We Are Legion (We Are Bob) 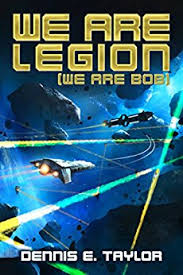 Bob Johansson has just sold his software company and is looking forward to a life of leisure. There are places to go, books to read, and movies to watch. So it’s a little unfair when he gets himself killed crossing the street.

Bob wakes up a century later to find that corpsicles have been declared to be without rights, and he is now the property of the state. He has been uploaded into computer hardware and is slated to be the controlling AI in an interstellar probe looking for habitable planets. The stakes are high: no less than the first claim to entire worlds. If he declines the honor, he’ll be switched off, and they’ll try again with someone else. If he accepts, he becomes a prime target. There are at least three other countries trying to get their own probes launched first, and they play dirty.

The safest place for Bob is in space, heading away from Earth at top speed. Or so he thinks. Because the universe is full of nasties, and trespassers make them mad – very mad.

Bob is a likeable guy who made money instead of doing what he really wanted to do…theoretical and practical physics.  Well now his head has been thawed, his brain scanned and he is the software property of the Theocracy America turned into.  Apparently not all of the Theocracy agrees that these von Neumann probes should be sent out into the Universe to procreate (or replicate) but all the kids are doing it so it’s GO TIME!

There are lots of places this story goes and most of the time it is snarky and humorous in it’s telling of horrendous things.  I love this kind of story and the presenter is on the top of his game.  Four out of five enjoyment points for both story and presentation.

Jon Grady has some issues that cause him to think differently than the herd. A Professor Alcott from Columbia University recognized this and took him under his wing to build a gravity mirror. Everyone thought by now we would have Mr. Fusion and Hover-boards well maybe we do and some douche bags in the BTC, Bureau of Technology Control, have them locked away for a day when we can be considered mature enough to have them. They sure didn’t like what Jon Grady made being loose.

The BTC snatches Grady and Alcott up and offer each of them a choice. Work willingly with the BTC or go to a civilized prison they have called Hibernity. This prison is where Influx really breaks some new ground using a concept I first read in a short story ‘I Have No Mouth and I Must Scream’. I don’t want to drop any more spoilers.

Influx is a ground breaking, well written and narrated work of art. This one gets a five out of five. Great job Mr. Suarez.

The Prefect (Book 5 in the Revelation Space series)

Back in the Yellowstone system this story is set amongst the Glitter band, a group of ten thousand human space habitats that are governed democratically via an organization called Panoply.  Each of the habitats have a central stalk that houses a poling core, using abstraction (a hand waving term for network), representatives from each habitat rotate through the civic duty of voting.

This idyllic thing comes crashing to a halt as an Alpha level imprint from the Silvestri 80, Aurora, takes over four habitats and manufactures warbots called Weevils to spread.  Meanwhile, a creature from the past called the Clockmaker which was thought destroyed resurfaces to threaten the maybe invincible Aurora.

Field Prefect Tom Dreyfus, Deputy Field Talia Ing, Deputy Field hyper-pig Sparva are just some of the key spicy characters leading the fight against the dark annihilators of humans in this installment.  I enjoy how the author juggles multiple story lines into a mesmerizing tapestry of entertainment.  Five out of five for this one.  Excellent job!