Audio Book Review: The Expanse has grown to five!

Posted by angus48 on November 6, 2015
Posted in: Reviews of the works of others. Tagged: Alien Worlds, Asteroids, Military SciFi, Space Opera. 1 Comment

Written by James S. A. Corey. 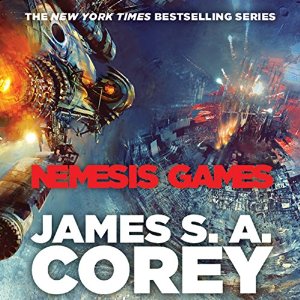 Now we’re talking. This was book five in the series and the narrator was in top form for this one. Good thing too because this installment was awesome.

Jim Holden is finally learning to keep his trap shut at appropriate times to…at least reduce conflict. The crew of the Rosenante have some down time while their ship gets pieced back together. Well down time is a bit misleading. Alex (the pilot) returns to Mars to reunite with the ex-wife and when that turns out as stupid as it sounds he gets to helping Bobbi (big Samoan Amazon goddess Martian Marine) go chasing down missing Martian Navy ships.

Amos Burton (Ship’s Engineer) returns to Earth to put closure onto his past and finds himself in a struggle for survival. It’s not the kind of struggle you would imagine of an ex-street thug/gangster. The Earth will never be the same.

Naomi (XO) also goes back to her past to try and right things that have been left askew. That goes about as good as anyone else’s plans. She finds that she has to use the inner strength she has acquired over the years to protect her new family, the crew of the Rosenante, from her old family. A bunch of Belter terrorists.

Back to Holden, who is also drawn into a missing ship conspiracy. These are Colony ships going missing past Medina Station and the system linking rings. Not to worry because the proto-molecule does get some story time here.

This does have a lot of potential and I hope the SyFy network doesn’t screw it up or half-ass the TV version due to release in January 2016. The story and narration here win 4 out of 5 starships from me. Good job!

One comment on “Audio Book Review: The Expanse has grown to five!”