Audio Book Review: School Pressure, you don’t know the half of it.

Posted by angus48 on September 26, 2015
Posted in: Reviews of the works of others. Tagged: intrigue, Science Fiction, Space Opera, YA. 1 Comment 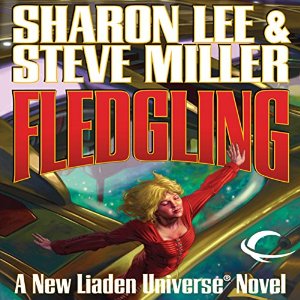 Apparently this is Theo Waitley book 1 but it is Liaden Universe book 11. Fascinating. It is the first work in this series I have consumed. Hmmmm.

Upon the fanatically safe world of Del Gado where a very prestigious university stamps out its graduates a young woman named Theo Waitley is coming of age. The daughter of Camille and Genzar, she has made it to fourteen years of age amassing a volume of warnings in her file regarding clumsiness and reckless decisions. On Del Gado some view that as evidence enough to drug the…offender into a safer state of being.

Her mother and Father, or Honor Grad, are high level academics in the University of Del Gado. They have the clout and sense to push back against such notions but for how long. A published peer of theirs has been outed as a fraud and they’ve uncovered a conspiracy that would bring down the University, the only major source of economic succor on Del Gado.

They must act to save their daughter and the well being of the planet.

I really enjoyed this work. Though there was little science involved there was bio-science, space opera and social engineering displayed in abundance. While not a novel I would usually seek out I do recommend this one for the younger crowd, perhaps twelve and up as any touchy subjects are dealt with rather tastefully here.

Four out of five entertainment points are thus awarded.

One comment on “Audio Book Review: School Pressure, you don’t know the half of it.”