Audio Book Review: Who is Abaddon?

Posted by angus48 on July 4, 2015
Posted in: Reviews of the works of others. Tagged: Alien, Military SciFi, Space Opera. 1 Comment

Abaddon’s Gate:  Book 3 of the Expanse 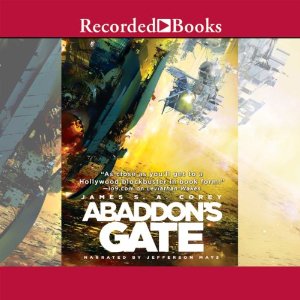 The proto-molecule discovered and malevolently exploited in books 1 and 2 is back and has formed a mysterious gate out near Uranus.  Martian warships are guarding it while science teams ponder where it goes and will something nasty come out.  Turns out the more important question to be asking is will something nasty go in…humanity.

Squabbling Earthers, Belters, Martians and OPA flock for the chance to get edge up on each other with Jim Holden and the Rocinante getting stuck in the middle.  Earth put up a fleet of older ships since their pasting at Gannymede and they had to hire a corps of contract maintenance civilians to service them.  Seems a great place for a psychotic terrorist to infiltrate and cause mountains of mayhem.

Our buddy Detective Miller is back with his Fedora that Holden hates.  He’s making a career out of causing Holden to question his sanity with his ghostly apparitions.  “Corners and doors kid.”

The threads are multiple.  Holden, the psychotic vengeance seeking terrorist, the dried out ex-subordinate of Fred Johnson who is the head of security on the Behemoth, Anya (whatever her Russian last name is) the Methodist minister who takes action then asks forgiveness are all the POVs.  The author has kept to his propensity for making you care about characters and then offing them, just saying.

This was a really good book and I liked the narration.  Four out of five enjoyment points are awarded.

One comment on “Audio Book Review: Who is Abaddon?”