Posted by angus48 on June 26, 2015
Posted in: Reviews of the works of others. Tagged: Aliens, Military SciFi, SciFi, Space Opera, The Expanse. 1 Comment 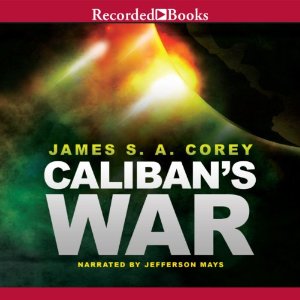 Continuing the saga begun in Leviathan Wakes, Caliban’s War takes us to Ganymede for starters.  Nefarious human organization is once again playing around with the Proto-molecule only this time they are not going for massive infection.  Grabbing up kids with a specific disease that blanks their immune systems they are using them as berserkers to rip through soldiers in the most advanced powered armor.  That’s one of the threads.

This really foul mouthed Indian woman who seems to be a big deal in the UN government is yanking on strings, trying to unravel the hawk machinations of the UN Fleet and her boss by using a Martian Marine Corp Gunnery Sergeant as her own little army.  Now that’s cool!

Of course, Jim Holden has gotten himself and the crew of the salvaged Rocinante stuck right in the middle of all this and he blunders along making dangerous assumptions…per usual.  What’s unusual is that he gets them fired from Tycho station and that brings the crew back together.

I’m enjoying these.  I know that SyFy has made a series out of these books which I haven’t seen yet and don’t know if I ever will.  The screen of my mind still works however and if only you could see what my mind does when the scenes in this book unfold.  I’m giving this four out of five enjoyment points.  If Holden gets smarter in the series or at least shows some growth then the next one will rate higher…maybe.

Enjoy, and be legit.  Do not pirate, and don’t utilize the refund business that audible plays at.  If you don’t like something, review it and consider it a lesson learned.